The main eye problems seen in Amstaffs are:

Called "juvenile cataracts" to differentiate them from the "old age" type cataract or from the degenerative type that results from injury, inoculation reactions or systemic disease.  The eye with the cataract(s) has a cloudiness of the lens of the eye in a relatively young dog.  The purpose of the lens is to focus the rays of light so that may form an image on the retina.  If the lens becomes cloudy then less light can enter the eye and the sight will slowly diminish as the cataract becomes larger.

This type of cataract will show up at an early age and in most cases is inherited.  One or both eyes may be affected and the cataracts may not appear in both eyes at the same time.  At this time there is no proof that eye color has any bearing on the likelihood of developing juvenile cataracts.  Many dogs with juvenile cataracts can lead normal lives well into their older senior years before the cataracts impair their vision dramatically.  Unfortunately, in some instances the cataracts are severe enough to cause blindness at a young age. 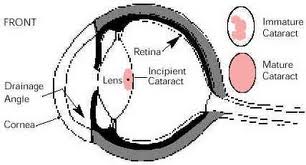 Progressive retinal atrophy, or PRA as it is frequently termed, is a long recognized, hereditary, blinding disorder. It is inherited as a simple autosomal recessive in most breeds.

PRA is a disease of the retina. This tissue, located inside the back of the eye, contains specialized cells called photoreceptors that absorb the light focused on them by the eye’s lens, and converts that light, through a series of chemical reactions into electrical nerve signals. The nerve signals from the retina are passed by the optic nerve to the brain where they are perceived as vision. The retinal photoreceptors are specialized into rods, for vision in dim light (night vision), and cones for vision in bright light (day and color vision). PRA usually affects the rods initially, and then cones in later stages of the disease. In human families, the diseases equivalent to PRA (in dogs) are termed retinitis pigmentosa.

In all canine breeds PRA has certain common features. Early in the disease, affected dogs are nightblind, lacking the ability to adjust their vision to dim light; later their daytime vision also fails. As their vision deteriorates, affected dogs will adapt to their handicap as long as their environment remains constant, and they are not faced with situations requiring excellent vision. At the same time the pupils of their eyes become increasingly dilated, in a vain attempt to gather more light, causing a noticeable "shine" to their eyes; and the lens of their eyes may become cloudy, or opaque, resulting in a cataract.

Diagnosis of PRA is normally made by ophthalmoscopic examination. This is undertaken using an instrument called an indirect ophthalmoscope, and requires dilatation of the dog’s pupil by application of eyedrops. Broadly speaking, all forms of PRA have the same sequence of ophthalmoscopic changes: increased reflectivity (shininess) of the fundus (the inside of the back of the eye, overlain by the retina); reduction in the diameter and branching pattern of the retina’s blood vessels; and shrinking of the optic nerve head (the nerve connecting the retina to the brain). These changes occur in all forms of PRA, but at different times in the different breed-specific forms. Usually by the time the affected dog has these changes there is already significant evidence of loss of vision. 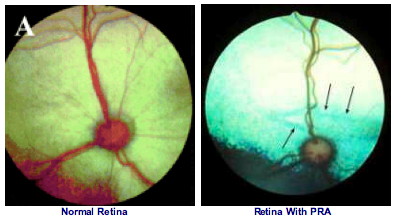 Eyelids of dogs can grow abnormal hairs. These hairs grow from the oil glands (Meibomian glands) of the lids and are called distichia if the hair protrudes from the oil gland opening onto the edge of the eyelid. Distichia are often irritating, especially if the hairs are long and stiff. Ectopic cilia are also hairs growing from oil glands on the eyelid, but the hair protrudes from the inner surface of the eyelid and is very painful, often causing corneal ulcers.

Dogs with distichiasis may or may not show signs of discomfort, ranging from slight intermittent squinting and/or rubbing of the eyes, to severe squinting and discomfort. Dogs with ectopic cilia are always uncomfortable. Most dogs with ectopic cilia are young adult dogs or older puppies. Both conditions are common in Shih Tzus. Many other breeds have problems with distichia. At Animal Eye Care, both conditions are treated surgically under general anesthesia, with a procedure called cryoepilation. With this procedure, the abnormal hair follicles are frozen using a liquid nitrogen probe, and the hairs then removed.

After surgery, the eyelids are swollen for 4-5 days, and the eyelid margins will depigment and turn pink. Usually, the lid margins will repigment within 4 months. It is important to understand that new abnormal hairs can grow from new sites after surgery, but this is uncommon in dogs older than 3 years old (unless the dog is a Shih Tzu). With cryoepilation, 85-90% of the treated hair follicles will not regrow. Repeat surgical treatment is rarely required, unless the animal is a puppy (and grows new hairs in new sites) or a Shih Tzu. 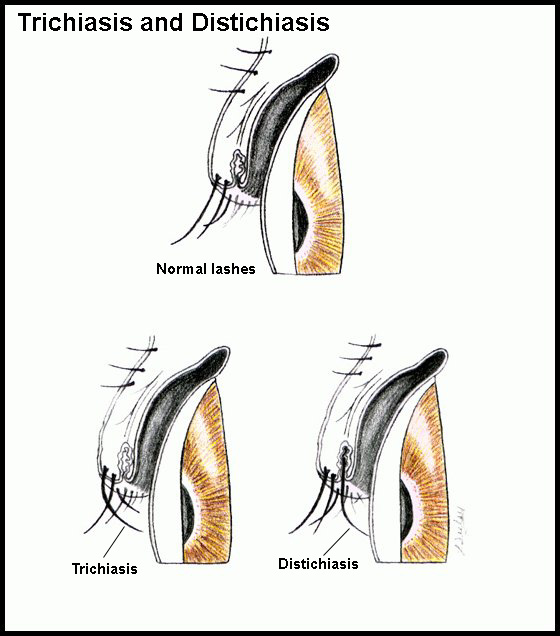